An American entrepreneur, author, technology analyst and diversity strategist, Shireen Mitchell is the founder of Digital Sisters/Sistas, Inc and Stop Online Violence Against Women. Below she shares our chat about the tech gender gap and digital racial divide.

WHY DID YOU CHOOSE A CAREER IN STEM? Good question. I don’t know that I chose STEM. I was gifted with my abilities and a curiosity at a time when people were saying to me “What are you doing?” They were questioning how I knew what I knew and why things came so easy to me. I was a sick kid, so I wanted to become a doctor. Being terrorized by a medical professional, I wanted to make sure other doctors wouldn’t terrorize young kids like myself. The natural state for me was very analytical and technological. So, I started out with video games. Then I started hacking.

WHAT WAS YOUR EXPERIENCE AS A GIRL IN TECH? The concept of a girl in tech was far and few between in the 80s. But it was the highest point when women started entering the tech field. Research shows that women made up 36% of the tech fields during that time. Now, in 2017, we are down to 22 – 30% women. That’s not even counting black women and girls.

WHAT HAS BEEN YOUR BIGGEST CHALLENGE WORKING IN TECH? The biggest challenge is in hiring practices and policies. That is where the pipeline breaks. It’s the “I don’t see gender” and “I don’t see color” mentality that is the break in the pipeline. For women of color, both those things are consistent. We are having these conversations about Hidden Figures. What we did during that time was remove those women from the timeline, and we started to believe what was presented to us instead of the data and what the leaders in tech were saying. It was a false narrative, and it still is. It’s an illusion that women and women of color, in particular, don’t have the ability to be leaders in tech. A white 20-something dropout being considered an ideal leader in the tech industry is a completely false narrative. When we talk about Hidden Figures, we know who had the intelligence. We also know who has been removed from the storyline to allow the false narrative to populate.

WHAT ADVICE DO YOU HAVE FOR OTHER BLACKS WHO WANT TO GET INVOLVED IN STEM? They need to know they have the capacity. Learning STEM is the easy part. The part that we haven’t handled is the social part and the bias it perpetuates. I would also tell them not to let anyone tell you that you don’t know what you know. Don’t let anyone deter you from building your base in tech. Create a space for yourself. Use a model that only you have, and you can change the industry by who you are.

What challenges have you overcome in your STEM Career?

Are you tired of seeing black women portrayed negatively in the media? I know I am! In an effort to combat that image, Danielle Ricks Productions and RixStar Studios have joined forces to create our first offerings for R&R MediaWorks. We are pleased to roll out two joint ventures that will focus on debunking the negative images of black women in the media and instead, tell the true story of who we black women are as dynamic, powerful, vulnerable, caring, professional women of color.

Our first offering is and EPK (Electronic Press Kit) for Denise J. Hart. She is a speaker, author, trainer and coach extraordinaire. Click on the YouTube video to hear her story.

The Things Black Women Are Tired Of Hearing, a web series that takes a look at the lives, minds and psyche of women of color. Click on the YouTube video to check out the trailer and sign up to get notices so you will be the first to know when the web series hits the Internet!

Interested in hiring R&R MediaWorks to tell your story?

We are here to service your digital media, video production, photography and film needs. We are dedicated to making sure all of our clients, regardless of race or gender are promoted in the most positive light. R&R MediaWorks for YOU! 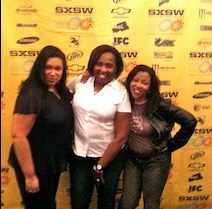 I recently returned from my second year at the Interactive track of South by Southwest, often affectionately referred to as the “Spring Break for Geeks.”  SXSWi 2011 brought us exciting panels and events by thought leaders, innovators and presentations who represent the brightest minds in emerging technology. It is here where new digital works, mobile apps, video games and innovative ideas get rolled out to those of us who are always looking for the next “big thing”. As we converged on Austin Texas March 11 – 20, my first impression of SXSWi 2011 was how much it has grown from last year. With more venues and attendees than ever, this was a Geek Diva, Gadget Girl dream.  One of the hottest trends, by far, what the incorporation of Group Texting and I’m excited to see where this technology is going. Another highlight for me was getting a chance to interview some of the power brokers and power users that I only see or communicate with online.

I got a chance to talk to Dennis Crowley, CEO and Founder of Foursquare at the Pepsi Max Foursquare Playground.

I also caught up with Pete Cashmore, CEO Mashable, which by the way was named  the most buzzed about brand during SXSWi in a study by Ad Age  and I also got a chance to talk to Romany Malco who hosted Geek Games at the Mashable House.

But the real highlight for me, as always, is geeking out with the Geek Divas.  I got a chance to speak with a couple of of the veteran SXSWi attendees, Lynne d Johnson, Senior Social Media Strategist at R/GA and SXSWi panelist Shireen Mitchell, founder of the no-profit Digital Sisters/Sistas.  I also spoke with first timer Beverly Jackson, Director of Marketing and Social Media for The Recording Academy/The GRAMMY Awards along with returning attendee and marketing professional, Shannon Mouton about the diversity, or lack thereof at SXSWi 2011.

Here is what they had to say about Blacks in Tech and Women in Tech at SXSWi 2011.