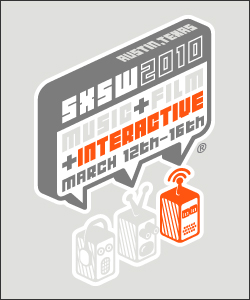 The South by Southwest Festival officially ended yesterday in Austin, Texas.  I was in Austin for  SXSW® Interactive which featured five days of compelling presentations from the brightest minds in emerging technology and tons of exciting networking events.  This year’s festival brought out record crowds for the interactive, film and music tracks drawing in web developers and designers, bloggers, mobile innovators, content producers, programmers, widget inventors, new media entrepreneurs and social media consultants from around the world. The five-day interactive festival showcased the latest ideas, the brightest minds and the coolest innovations of the future.  Yet, I couldn’t help be a little jealous when the energy changed as SXSW kicked off with the music track, bringing in thousands of artists that totally changed the energy to something that was just magical to watch.

My old music days aside, SXSW Interactive met all my expectations and in some cases surpassed them.  I was able to meet many of the geeky, techie folks I’ve been communicating with online over the past year.  Clearly one of the highlights for me was meeting Dave Grossman, one of the founding members of Amplify, which has become an addiction of mine.  Mostly I was able to learn, engage and connect with so many people on a variety of subjects from app development and monetizing your blog to privacy issues and protecting copyrighted material on the Internet.  But if I had to sum up my SXSWi experience in just five takeaways it would be this:

Good story telling, seeking feedback, talking to people face-to-face and taking control of your privacy… not something you would expect to hear from a group of people who live, work and play online, as I do.  How refreshing to know that the human element is not dead in Social Media.  In fact, we need humanity in order survive in the digital space.  I would have never drawn this conclusion before SXSWi but I’m glad to know the humans are still in running the show and are still in control.  Let’s see what next year brings!